I haven't finished it yet but I wanted to post it somewhere where i would remember to finish it xD. It's basically a back story for Shatteredkit. 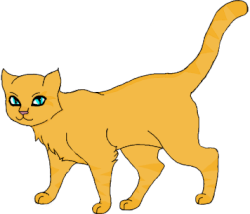 Shatteredpaw giggled, grinning over to her best friend- Sporepaw- who was still trying to wriggle out from the bush he had got stuck under.  After a moment longer she dipped her head down and moved one of the branches that was pinning him down.

Sporepaw scrambled up and gave a sheepish grin to her. “I got it” he pulled a sparrow out through a gap in the bush.

“Only you would be crazy enough to try” Shatteredpaw purred, touching his nose with her own. Almost the entire clan thought that they would become mates when they became warriors and she hoped so herself.

“But you know you love the craziness that is me” Sporepaw let his nose touch hers. When he pulled away his eyes and the small smile on his face told her exactly what he had meant.

“And you know that you love me for rescuing you out of your crazy situations.” Shatteredpaw chuckled, sitting down and curling her tail around her paws.  Her eyes slowly rose from looking at her paws, up to his face and then meeting his gaze.

Sporepaw smiled, “Of course Shattered” He touched her cheek and gave it a gentle lick. “Let’s go back” This was the closest they’d ever really been- usually they were just really close friends. This was the first time they’d ever admitted there feelings for each other even if it was in a jokey manner.

(Next morning)
Shatteredpaw looked at the sleeping form of the light golden tom that was curled up beside her and purred to herself.  She couldn’t see any other cats in the den- There was only Maskedpaw and Frozenpaw who would be around anyway. Even so she whispered her next words. “I love you Sporepaw. Don’t ever leave me.”

The golden body shifted and the pale ears flicked as she spoke.  “Don’t worry Shatteredpaw- I won’t ever leave…” His words were cut off as he fell back into a deeper sleep.

Shatteredpaw smiled to herself as she settled down with her head on his flank. She would wait until he woke up or one of their mentors came to wake them before she would get up. Maybe today they would do battle training since they had been hunting yesterday. Without realizing it she fell asleep, breathing in Sporepaw's sweet scent.

The two sleeping apprentices were awoken by Sporepaw's mentor shouting into the den. "Oi, Sporepaw, Shatteredpaw- Get up now lazypaws".  Shatteredpaw got to her paws with a yawn and nudged Sporepaw who was groaning and grumbling about getting up.

Smudgedheart- Shatteredpaw's father and Sporepaw's mentor-was standing outside looking amused when the two apprentices blearily stumbled out into the sunlight. "Battle training today guys" He purred, ushering them over to the camp entrance where Greysnow was waiting for them.

Shatteredpaw's mentor smiled at her as she drew up to her and followed the older two cats out of the camp and towards one of the clearings that were in their territory. As they walked they past the bush that Sporepaw had gotten trapped in yesterday, and Shatteredpaw looked over to him with a smile.  He smiled back cheekily as they reached the training den.