Welcome my lovelies...
To the ranks of the various clan members of the Five Clans' Clan's Clan
(Lol try saying that five times fast XD)

Moderators:
Kat - Queenstar
~ "Leadership is intangible; therefore no weapon ever designed can replace it."
~~~
Torchiclove - Tigerfrost
~ "900 years of time and space and I've never met anyone who wasn't important."

Roleplayers:
The Stump - Darkspin
~ "Can't touch this BABAMB!!"
~~~
Biscotti - Dawnstorm
~ "Live your life for tomorrow."
~~~
LuxrayGirl - Willowcreek
~  “The more I learn about people, the more I like my dog.”
~~~
SmartPickel - Brooksong
~ "Because it doesn't matter. Because they're people I don't care about,they have nothing to do with me...And I don't care what they think of me."
~~~
Raven - Rainstrike
~  "A fool thinks himself to be wise, but a wise man knows himself to be a fool."
~~~
Doveflight - Ditto XD
~ "This site is so confusing to me... o.o I understand nothing."

Trainees:
Meowthlover - Hazelpaw
~ "Role-playing is just like life, only that there are fewer complaints."
(Mentor: ???)

Thestral - Bloodpaw
~ "Its not over, until its over."
(Mentor: Spiderpetal)

Details from the Deputy
"Duty is the sublimest word in the English language. You should do your duty in all things. You can never do more and should never wish to do less."

As I'm sure many from the old site remember, I am Kat, the second in command or Deputy as we all know it best. I'm known as Queenstar. Why? Because I am a fucking queen and I run this bitch. Actually the name came about in a rather hilarious Skype session. So, the whole story is, I was previously Lionessrage but when I was names by Starclan, instead of Lionessstar, it was decided that I should be Queenstar. So here I am in all my queenly glory. I am no afraid to enforce the rules and bitch at you for fucking up. I'm in the military, I do that shit all the time.

Now that we have that out of the way, time for the part which we had ALL been waiting for... your clan pairing names! As Deputy, it is my job to track all the current Mate pairing names, potential clan pairing names and the hilarious crack pairings that we love seeing. If there is a pairing not on my lists, please PM me with the pairing and which section it belongs in.

Actual Mate Pairings:
These pairings have been copied and pasted off of the Pokefarm Forum. Please come to me with any updates.
CherryLeopard - Featherclan's Power Couple
LeapingShadow - The one that won't work out
HoneyJuniper - The Sweeties
ShiningMeteor - The shocker
OceanPepper - The "this is a thing?"
BlackHazel - That happened?

Potential Mate Pairings:
This is usually based off of crushes that other cats have.
SplatterSky - "Blood thirsty? It would totally work"
Splatter x every she cat in Emberclan practically - "Manwhore"
PaintedPuma - "Eh... I guess?"
NettleRaven - "I just met you, and this is crazy, my mom is bothering me so mate me maybe."
SapSmaze - "The knight in shining armor"
LeapingSlate - "It's true love that just won't happen"
LightLeopard - "Unrequited love"
SilverBriar - "The second choice"
PantherBriar - "Not as good as his brother but still a good friend"
ShadePride - "She saved his life."
SilkQuartz - "Girl Power"
PantherAsp - "All toms look for She-cats like their moms"

Past Pairings:
These could have happened, but didn't. Mostly it's for dead cats but occasionally it can be used for Moon of the Mates, just to see which cat has fought for who, or was thinking of fighting for whom.

Crack Pairings:
Crack Pairings can be things like "Oh I love how these two cats act together and it's so funny" or something like "This will never happen but it's funny." Ships can be romantic or non romantic. Past Crack Pairings will be on here as well. Anything with an Asterisks has a story by Kat.

TigerLion - The Flirtatious Brothers; best wingmen ever.
*TigerLionCherry - The Flirt Masters
TigerLionCherryCheetah - In Which the trio teaches Cheetahswiftt how to 'properly' flirt. (PAST)
*MeteorPalm - If she were younger and he were older, it would be a thing. But, it's sibling like lurves.
SandPebble - Sandstar and Go Pebble
*FlashLion - Because it's hilarious.
EmberShiver - I, Kat, ship it. (PAST)
ThunderCheetah - its funny XD (PAST)
DesertLight - I've been shipping this for over a year hah!
ClashThunder - because why not? (PAST)
*MeteorLeopard - Because it happened in 'The Flirt Masters'
ShellSnow - Shell thinks of Snowstar as her mom. Not a romantic ship!!!

wait, what does it mean by SilverBriar? o.o 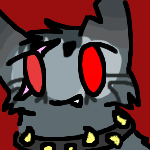 It means its a pairing of Briarpaw and Silverpaw, ya goof XD

Ooo question- Why does it say EmberStraw are Past? As well as GlitterStark??

Because as of right now, we ain't got those characters, so it was a past pairing from PF.

Not sure where to put this but I thought I should warn you guys that I've got exams next week, so I probably won't be posting much, if at all. Sorry! :/

That is something you can put in the random discussion area. Actually, that makes my post all the more easier to make ^^'

Now, I understand I haven't been on very much since the actual RPs started up, and I'm very very sorry about that. However, my schedule's become quite hectic with more state testing, a huge, 800 point research essay about video games I don't even play (COD, GTA I only played that when I was a little kid..., etc.), as well as family crap where my stepmom thinks its perfectly fine to cut the WiFi off every time she doesn't get something she wants. So basically, this is a post letting you guys know that I may only be able to get online to update and check up on stuff, but I generally don't have the time to RP the way I'd like to until about the end of May. So no, I won't be completely absent for the next two months, but I most likely won't be able to do much RPing at all.

If you guys wish to keep RPing on here, that's totally fine with me- it jut means I'll have to play a bit of catch-up later on. But that's cool, because I don't want to keep you guys from enjoying the site since it's just as much your site as mine. We all own it. However, if you feel uncomfortable going on without my characters being RPed, I understand that too. It'll be a nice little period of time to better explore the site and make it flourish- set up you're own private or Other Rps, blogs, fanfics, and original stories ^^ Or make future plans that I don't know about jut to fuck with me XD
Just don't let my lack of RPing kill the site please. I promise it will bounce back stronger than ever once summertime hits!!